Working in the technology industry is immensely exciting due to its fast-paced nature, progressive attitude and mind-blowing discoveries that are literally occurring with each minute that passes. The sector is arguably having one of the most direct impacts on society and has never been more relevant as it is increasingly transforming the way we are doing things both at work and also at home. 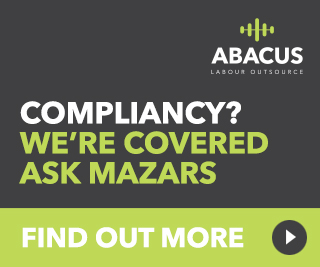 With an attitude driven by innovation, processes are being made quicker, faster and more efficient in a breadth of aspects, and as more breakthroughs are coming through, the industry has no signs of stopping.

To match the inspiring nature of the tech industry, working in the sector also has great financial benefits, as it provides a good wage with the average salary reaching an impressive £62,000. With the average UK salary amounting to £29,009, working in tech provides significant opportunity.

The average salary in the industry is also a reflection of the world we live in, where social media has an enormous impact on the globe with the likes of Facebook, Twitter and Instagram, combined with various services being provided with just a tap of our fingers on our digital screens, which companies such as Amazon, Apple and countless other tech companies.

With the significance of tech in nearly every industry, from entertainment, manufacturing, transportation and travel, it comes as no surprise the decent wages tech employees are gaining. But looking even further into some of the most profitable tech companies in the globe, it is clear that whilst employees are earning a healthy salary, the CEOs are the ones that are seeing the seriously impressive benefits of the industry.

But which tech CEOs are earning the most and how many days would it take their average employees to earn the salary of those at the top for just a single day’s work?

RS Components reveal the tech giants that have the biggest pay gap between their CEO and average employee in this graphic. 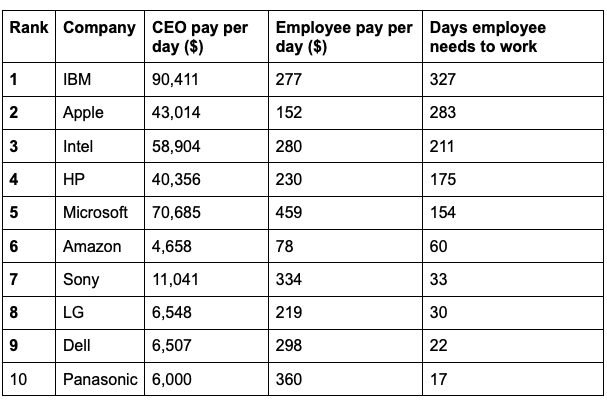 The results show that whilst being an employee in the tech sector can leave you with a better average wage compared to other industries, the real wealth of the industry is shown in the salaries of its CEOs and the astronomical difference some of these top individuals are earning compared to the rest of the company.

IBM comes out as the company with the biggest pay gap between its CEO and average employee. CEO Ginni Rometty has held the position since January 2012 and earns a staggering daily salary of $90,411. Joining the company back in 1981 as a systems engineer, Rometty’s wage has increased, making her one of the highest paid CEOs in the tech industry. With IBM’s average employee pay amounting to $277, per day it would take them just under a year (327 days to be precise) to earn just what Rometty earns in one day, which is $90,411 – that is over 300 times more than what the average employee at IBM is earning.

Apple comes in at second place for having the widest pay gap between its CEO and average employee. Tim Cook holds a daily wage of $43,014, which interestingly is not even in the top three highest CEO salaries studied, with Intel and Microsoft’s CEO’s earning at least $15,000 more each day. The average employee at Apple, however, earns the second lowest wage of all businesses analysed, at $152 per day. The lowest earning employees are Amazon at $78 each day. At Apple, it would take employees 283 days of work to reach Cook’s daily rate.

Looking at the results then, it is clear to see that whilst the tech industry has huge financial benefits for its employees with their salaries sitting well above average across the UK, there are significant issues with the staggeringly high salaries of its CEOs and how much more they are earning. The tech sector is bursting with investment and profit, which is only set to increase as we continue to become more intertwined with the digital world, but is there a way for the sector to manage its wage gap between its majority of employees, and those at the very top?

The post How much are tech CEOs earning compared to their employees? appeared first on RECRUITING TIMES.